13.3.2019 Leipzig. The starting shot for the fifth enlargement: Porsche is investing more than 600 million euros in the Expansion of its plant in Leipzig. Thus, the company sets the course for the future of its site in Saxony and for the production of future models.

The kick-off for the extensive Expansion Saxony’s Prime Minister, Michael Kretschmer, Leipzig’s mayor, Burkhard Jung, Albrecht Reimold, the Board of management for production and logistics of Porsche AG, and Gerd Rupp, Chairman of the Executive Board of Porsche Leipzig GmbH gave on Tuesday. In a festive ceremony, the Foundation stone for a new body shop with a total laid area of 75.500 square meters. From the beginning of the next decade to be here manufactured the bodies for the next Generation of the Porsche Macan, which will come as a fully-electric series on the market.

“In 1999, Porsche has opt for the location of Leipzig,” says production Executive Albrecht Reimold. “Since the first sod in February 2000, we have invested more than 1.3 trillion euros in the development of the plans. And our 1999 decision, the us in Leipzig to settle, we have no regrets. For this reason, we make the plant fit for the future. We prepare our Saxon site on the mobility, as well as the customer demands of the future and values it.“

“The decision to manufacture the next Generation of the Macan in Leipzig, is a vote of confidence for the employees at the site,” says Gerd Rupp, Chairman of the Executive Board of Porsche Leipzig GmbH. “With the expansion of the plant, Porsche takes on an active role in the design of the electric mobility in the free state of Saxony. Porsche remains a future-oriented economic engine in the Region.“

Prime Minister Michael Kretschmer says: “Porsche is shaping the mobility of tomorrow, in the future, so in Saxony. I am pleased to have this far-reaching decision of Porsche, which is also an award for the staff and the location in Leipzig. About 20 years ago, the company has decided to his second home in Leipzig. Today, this success story will continue. The Expansion is a strong vote of confidence in the future strength of the free state of Saxony.“

“The relocation of Porsche here in the North-West of Leipzig, was in our city a stroke of luck,” says Lord mayor Burkhard Jung in the context of the laying of the Foundation stone. “The example of Porsche, many other companies followed and the investment in the future for Innovation, stability, and secure jobs.”

With the Expansion of Porsche creates the opportunity to produce in the future on the existing production line in addition to gasoline and Hybrid models, full electric vehicles. The start of the next Generation of the Macan: As a purely electrically powered vehicle, based on the so-called PPE-architecture (a Premium Platform Electric), the new Macan will roll at the beginning of the next decade in Leipzig.

The Porsche Leipzig GmbH can look back on a successful history: in 2002 the factory with the serial production of the SUV Cayenne with 259 employees-began. Since then, the site of what is planned to sites of one of the most modern and most sustainable production of the automotive industry.

The model Macan was already in the year 2011 the godfather for a break and a real success story: For the Macan plant in Leipzig has been expanded to a full plant with its own body and its own paint shop. In two years, the series Panamera to be produced entirely in Leipzig wants to. Today, the Porsche Leipzig GmbH employs around 4,300 employees and the facility manufactures the Porsche model series Panamera and Macan as well as the bodies for Bentley. 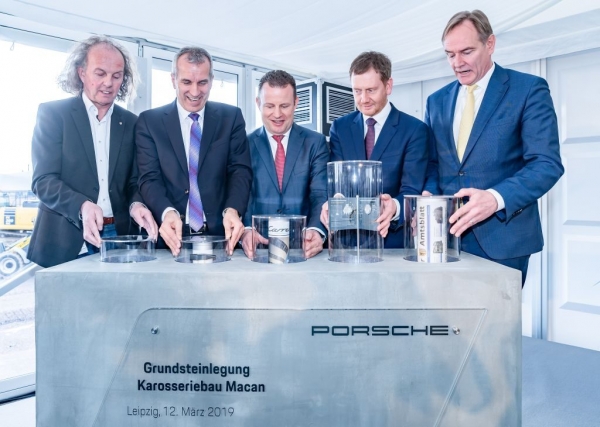 Laying of the Foundation stone for the body of the Macan, the 2. Generation of Porsche Leipzig GmbH at the 12.03.2019