2.5.2019. Refuel in Germany in April as expensive as never before in this year. The monthly market analysis of ADAC, at a cost of a Liter of Super E10 in the monthly average 1,447 Euro and nine cents more than in the previous month.

Diesel price increased by only 1,4 Cent to 1,279 euros. Compared to January, the price increase in the monthly average for Super E10 at around twelve, and with Diesel at around four cents per litre.

Compared to the previous week, Super E10 increased by 1.1 cents to an average of 1,479 euros per Liter, the price for a litre of Diesel, however, remained with 1,294 euros.

The reasons for the increase in costs, especially since the beginning of the year increase in Crude oil prices. The stricter US sanctions against Iran, the on 1. May came into force, to drive the prices on the world market in addition. The somewhat more favourable development in Diesel is mainly due to the after the end of the winter reduced heating oil demand.

The ADAC car traveller is recommended to note when filling up the regular fluctuations of the fuel prices in the course of a day. According to the evaluation of the ADAC, the best times are between 19 and 22 o’clock. Support the Smartphone App “ADAC fuel prices”. For detailed information on the fuel market, there are so www.adac.de/tanken. 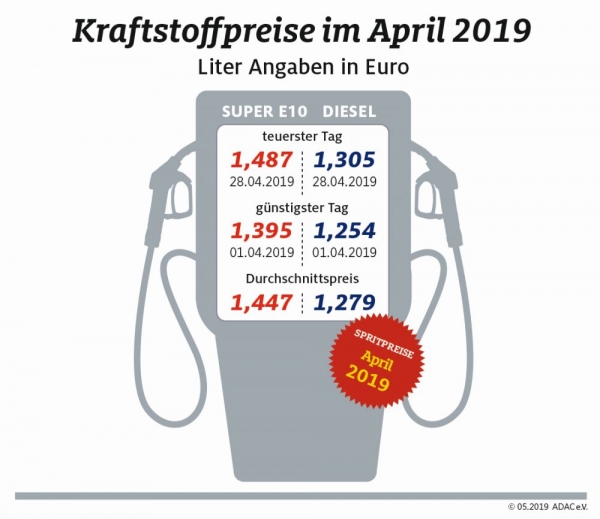