22.5.2019. The nationwide average prices, the ADAC determined weekly for the drivers, point for gas more expensive: 3,1 cents per Super E10 more than the previous week, and thus 1,527 Euro per Liter.

This upward trend continues, in the meantime, the eleventh week. But also the breather in diesel price last week is already coming to an end: The Liter costs in the national average now 1,316 Euro, up 1.8 cents more than the previous week. Both varieties reach their peak level in the current year.

The persistent increase in consumer prices at the pump is critical to the lake. Because despite all the movement on the world markets, the prices of crude oil and the Dollar are now back to a similar level as in mid-April. Thus, Refueling is currently too expensive.

The ADAC motorists recommends, to compare against the fuel prices. Who make the sometimes considerable price differences between the tank and the times of Day uses, saves money, and strengthens the competition between the providers. Uncomplicated and quick help offers the Smartphone-App “ADAC fuel prices”. For detailed information on the fuel market and current prices there are so www.adac.de/tanken. 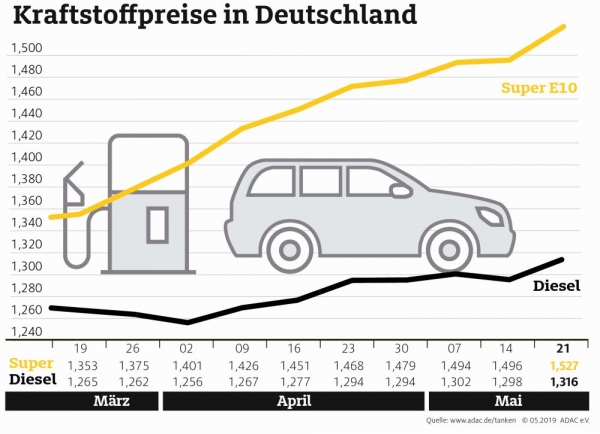 Petrol price rises for the past eleven weeks in a row (source: ADAC e. V.)