test mode Daimler shareholders vote by a large majority for the new group structure, with Daimler AG as the parent company – Tuning Cars Skip to content

23.5.2019. The shareholders of Daimler AG voted at the annual General meeting in Berlin on Wednesday with a large majority for a remodelling of the Daimler group. Thus, the way the group is free to transfer the passenger Car and Van business as well as the Truck and Bus business through a spin – off to legally independent units.

The new group structure (PROJECT FUTURE) is with the registration of the demerger in the commercial register. The aim is to Start in the new company structure, then it will be 1. In November 2019. From this point on, the Mercedes-Benz AG will be responsible for the business fields Mercedes-Benz Cars and Mercedes-Benz Vans, while the divisions, Daimler Trucks and Daimler Buses, are combined in the Daimler Truck AG. The already legally independent Daimler Financial Services AG, is from 24. July 2019 Daimler Mobility AG hot. The two new companies will be like today’s Daimler AG and the future of Daimler Mobility AG co-determined German stock companies with headquarters in Stuttgart, Germany.

“Today, the shareholders of Daimler AG have agreed to our plan for a new, modern consolidated structure. That was the decisive step, to start in November in our new set-up. Daimler has the right to be in the new mobility world leader. The maximum required strength in innovation and the agility to change quickly to respond. The new structure extends our ability to act in a dynamically growing competitive environment, so in relation to the procurement of capital. It makes it possible that we can better respond to customer and market needs. With the new set-up, we want to offer our employees a long-term perspective. We are with the employee representatives agree. With the reorganization of the Daimler group and today’s decision will set the course for our company and its employees, in order to be in the future mobility of the world successfully,“ said Manfred Bischoff, Chairman of the Supervisory Board of Daimler AG.

The Daimler AG as the listed holding company intends to exercise Governance, strategy and control functions as well as the group providing cross-cutting services. With three powerful units under a common roof, the group ensures a more flexible and focused. With the new structure, Daimler wants to give its business fields, more entrepreneurial freedom, the market and customer orientation, as well as collaborations easier and faster. By targeted alignment of the new companies on their customers, markets and core competencies into new growth and earnings potential. In addition, the strengthening of the divisional structure-will be used to retain existing long-term investors and new investors and partners.

“The new structure is a clear forward strategy, we increase our impact and long-term employment secure. For us, this is what the General works Council, from the beginning, our primary goal in all decisions and to project the future. The agreement that we negotiated in the framework of the project for the future, brings in the first place for the colleagues security: securing the future 2030 are ruled out compulsory redundancies for employees of Daimler AG. A transformation commitment ensured for each employee to the appropriate job in times of change. This includes security for the German locations by the investment commitment of EUR 35 billion. In the future we will take care of us with a group-wide works Council in the interests of the employees. The new units will be councils, co-determined companies with joint supervision. The mobility of the future will be exciting with many new opportunities. We at Daimler wants to use it,“ said Michael Brecht, Deputy Chairman of the Supervisory Board and the General works Council, Chairman of the Daimler AG.

The voting on the adjustment of management Board remuneration with incentives for sustainable business development and a stronger focus on the Transformation in the direction of the mobility service provider what is approved by the shareholders, as well as to an extension of the company object to the “transportation and mobility services and concepts” in the Statute.

Changes in the Supervisory Board

Changes in the Executive Board

“Dieter Zetsche is an exceptional Manager. He has led Daimler successfully through difficult Terrain back to the top and together with the employees of the profound transformation of the company continued. Under his leadership, Daimler has developed the basis for a good future. Him our unqualified thanks,“ said Bischoff.

Zetsche began in 1976 at Daimler in the youth group and has gone through a variety of stations in a managerial function successfully. The Ph. D. degree in electrical engineering what, among other things, in a senior position in the business field of commercial vehicles in Brazil, Argentina and the USA, before he was appointed in 1995 as a sales Manager in the Board of management of Mercedes-Benz AG and then as a Board member of the business unit commercial vehicles. In 2000, he was CEO and President of Chrysler, in 2005, the head of Mercedes-Benz Car Group and the beginning of the year in 2006, the Chairman of the Board of Daimler AG.

With the end of the annual General meeting Ola Källenius took on the responsibility as Chairman of the Board of management of Daimler AG and head of Mercedes-Benz Cars. “With Ola Källenius we have appointed a recognised, internationally experienced and successful managers from their own home, can also inspire people, for one thing, as Chairman of the Board and head of Mercedes-Benz Cars. At the same time, we rely on the proven double responsibility of the Chairman of the Board, who is also the management of the largest division of Daimler,“ said Bischoff.

Källenius joined in 1995 in the group and was appointed after the Acquisition of several national and international Management functions, with effect from January 2015 as a member of the Board of management of Daimler AG with the Mercedes-Benz Cars sales. In January of 2017, he took over responsibility for group research and Mercedes-Benz Cars development.

Successor of Källenius, the Daimler Board of management Markus Schäfer is. He is head of group research and Mercedes-Benz Cars development. In addition, Schaefer at Mercedes-Benz Cars for purchasing and supplier quality will be responsible.

In addition, Harald Wilhelm, took over the already 1. April 2019 the Board of management of Daimler AG, initially without the business area of the Department Finance & Controlling and Daimler Financial Services was appointed, with the end of the shareholders ‘ meeting. Harald Wilhelm what previously Chief Financial Officer of Airbus and member of the Executive Committee of Airbus. He succeeds long-standing chief financial officer Bodo Uebber, who had sought at his own request, not an extension of his until December 2019 current order and at the end of the annual General meeting, resigned from his mandates as laid. “Bodo Uebber joined the group in 1989, the Daimler group and has led since the end of 2004, the financial division of Daimler AG. He was the reliable, economic Conscience of the company and has implemented many initiatives in his Department, as well as group-wide. We would like to thank Bodo Uebber, for his successful and hard work and wish him well for the future,“ said Bischoff.

Video to project the future: https://youtu.be/2fwadq8HWN0

The most important results at a Glance:

Discharge of the management Board
93,89%

Discharge of the Supervisory Board
93,51% 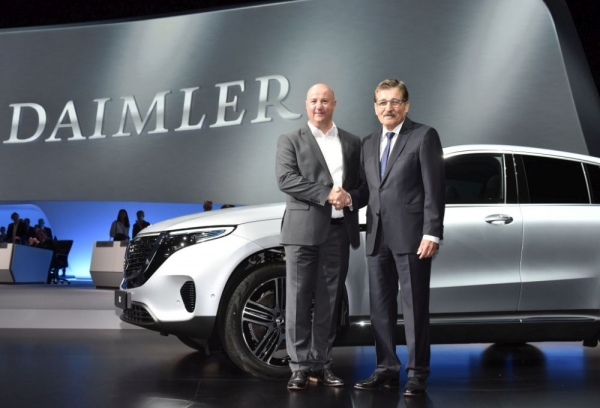