27.6.2019 Kecskemét, Hungary. A few months after the CLA coupe rolled out in the Hungarian Mercedes-Benz plant in Kecskemét is now, therefore, the new CLA Shooting Brake, ‘ from the Band.

Thus, Mercedes-Benz is introducing Cars not the car, only the two sportiest models from the new compact Generation of our proven, Top-quality on-the-road – so in the production, the company sets standards in terms of flexibility, efficiency, and sustainability. The international start-up cascade of compact cars that started in April 2018 with the start of production of the new A-class in Rastatt, Germany, has reached another milestone.

“In the Mercedes-Benz plant in Kecskemét, much of what characterizes the intelligent production of tomorrow, already today, to experience. We work in a networked, digital and flexible, so that the start-up of the new CLA Shooting Brake blends seamlessly into our production processes. All of this is possible thanks to our highly motivated and highly qualified employees. We are proud of this team. Colleagues to ensure that the success story of the CLA at the Kecskemét plant,“ said Christian Wolff, CEO and site Manager of the Mercedes-Benz Manufacturing Hungary Kft.

In Kecskemét, in the global production network

The Hungarian Mercedes-Benz plant has expanded since the start of production in 2012, its importance in the global production network of Mercedes-Benz Cars is steadily decreasing. Among the Strengths of the Production system, in particular, the direct exchange with the Lead plant for the compact car in baden-württemberg, Rastatt, Germany, in addition to digital networking.

The workforce in Kecskemét produces the new CLA Shooting Brake and the CLA coupe, exclusively for the world market. Since 2018, the A-class compact sedan, the production portfolio of the Mercedes belongs to the Kecskemét-Benz plant.

Focus on flexibility, efficiency, and sustainability

Modern industry 4.0 technologies characterize all locations
Mercedes-Benz Cars, and are continuously developed further. So the plants are able to respond with Maximum flexibility to changing customer requirements. The focus is on flexibility, new digital solutions and sustainability. Because fluctuations in the market, changes in customer needs and a variety of equipment options make it necessary, the production is as agile as possible to set up. A variety of architectural and technological innovations contributes.

So it was in a pioneering pilot project in the Mercedes-Benz plant in Kecskemét tested, as the logistics can also make use of the air space. In a period of five months, spare parts for plant maintenance with drones between the warehouse and maintenance workshops over the roofs of the factory have been transported to the halls. This additional transportation increases the flexibility and reduces the traffic within the plant. The project will in the future be piloted at further locations, in order to optimize the processes.

Further applications in the Mercedes-Benz plant in Kecskemét, so show an example of how Mercedes-Benz Cars is developing its production network more:

Flex-cell production: In the newly constructed shell of the main hall, the Front and rear flaps for the new series in the so-called Flex-cells. Modular, exchangeable stations make it possible to switch within a very short time between the models.

New material handling concepts in the shell: The Mercedes-Benz plant in Kecskemét, the Transport of Parts to the new technologies. Among other things, driverless transport vehicles (AGVs) move the wheel arches, and even entire bodies – the new Compact within the shell between the individual production plants. This not only improves the efficiency, safety at work.

Forklift-free installation and driverless transport system (FTS): the objective is to remove the stacker in the Assembly hall. This mainly serves the purpose of security. Instead of the forklift trucks special roll-under frames are used. They carry tools, the Material, regardless of the charge carriers with flexible and reliable logistics train, so-called tugger trains, in the Assembly hall. In addition, the work of driverless transportation systems (FTS) uses. They deliver exactly to the individual vehicle-specific components and parts to the Assembly line, where they without the buffer are mounted. 99 percent of the Assembly sizes in Kecskemét are already forklift-free.

Paperless factory: this project shows how digital industry 4.0-solutions increase the efficiency of production and at the same time conserve resources. Modern data transmission is gradually replacing all of the documentation on paper. For example, the accompanying documentation of the vehicles on the tape and the documents for the hedging of internal processes.

CO2-neutral production: by 2022, all Mercedes-Benz Cars will be powered plants in Europe CO2 neutral energy. The Mercedes-Benz plant in Kecskemét will already start next year with the purchase of CO2-neutral electricity. To increase the energy efficiency of the entire exterior lighting to LED has been changed so lamps. By 2021, the lighting systems then followed in all buildings.

At the world premiere at the Geneva motor show in 2019 for the “designer piece” moved all the looks: With its distinctive front end and the gently muscular, cut the rear, the second Generation of the CLA Shooting Brake does not only convince optically. The model also provides even more space for shopping or sports equipment. As well As the CLA coupe and wagon, especially the younger group of buyers it will appeal to the groups.

On individuality and comfort, so the technological equipment aims: To installed the latest Version of the infotainment system for Mercedes-Benz User Experience, MBUX,. It now also includes the MBUX interior wizard that allows the intuitive, natural operation of comfort functions by detecting movements. The ENERGIZING comfort control functions such as air-conditioners are so-, seat – and light control intelligent networked together. A suitable feeling of space is, according to mood to create.

So in terms of safety, the model is on the elevation of the time: The CLA Shooting Brake features the latest driver assistance systems, cooperative driver assistance, and provides for the Active safety Functions from the S-class.

The new CLA Shooting Brake comes in September 2019 at the market.

Since market introduction, more than 750,000 vehicles of the models CLA coupe and CLA Shooting Brake have been sold. One of the biggest markets in 2018 as China, the USA and Germany. Already with the first Generation of the CLA, Mercedes has addressed-Benz successfully, new groups of buyers. In the US, CLA-clients are on average about ten years younger than the average Mercedes-Benz customer. In Europe in 2018, drove almost two-thirds before a competition vehicle.

About the Mercedes-Benz plant in Kecskemét

The Mercedes-Benz Kecskemét plant employs around 4,700 people. In the year 2018, more than 190,000 Mercedes-Benz have been producing compact vehicles. In the factory, the four-door compact coupe CLA and the CLA Shooting Brake will be produced in Kecskemét. These two models will be produced in Kecskemét, exclusively for the whole world. Since may of 2018 for the new A-class and supplements the product range of the Hungarian production site. 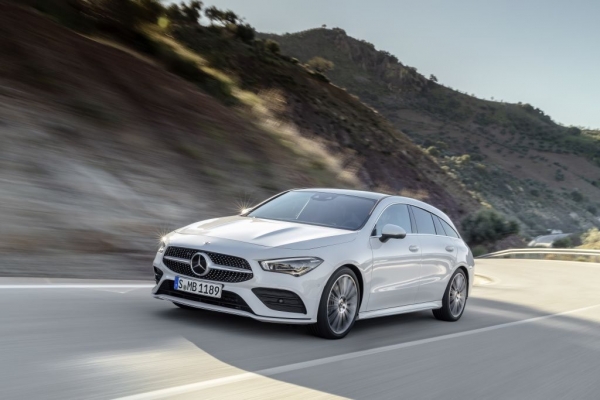