9.1.2020 Wörth am Rhein. In the case of Mercedes-Benz Trucks has today celebrated a major milestone with numerous guests.

Together with Malu Dreyer, Minister-President of Rhineland-Palatinate, and Dr. Volker Wissing, Minister for Economics and transport of Rhineland-Palatinate, opened Stefan Buchner, member of the Board of management of Daimler Truck AG, responsible for the regions Europe and Latin America and the Mercedes-Benz brand Trucks, and Thomas Zwick, Chairman of the works Council of the Mercedes-Benz plant in Wörth, one and a half years after the groundbreaking ceremony for the advanced development and testing center in the southern Palatinate.

Around 50 million euros were invested in the competence centre for development work of Truck – including a new test rig building System and full – vehicle tests and an office and workshop building. Additional 20 million euros were invested in the ultra-modern Truck chassis dynamometer for comprehensive Tests of Mercedes-Benz Trucks in real-time. The plant is another integral part of the Mercedes-Benz Truck Testing Campus and was taken in 2019.

Stefan Buchner: “The new development and test capacities to perfectly complement the activities of our Truck production in Wörth. By bundling the development of sizes, the largest site of Mercedes-Benz Trucks is growing in importance and offers attractive, secure long-term jobs in the southern Palatinate.“

Prof. Dr. Uwe Baake, Director of product development for Mercedes-Benz Trucks, added: “Our new Truck chassis dynamometer is one of the most modern in Europe. We have taken Tests and measurements, thanks to its accurate driving simulation for conventional and alternative drive trains from the road in the test hall and make an important contribution to sustainability and the discharge of public roads.“

Malu Dreyer: “The government is aware of the importance of the automotive industry for the Rhineland-Palatinate economy is very aware of. It has grown to be one of the most important industries in the country. For me and my government is, Together with manufacturers and research-based cluster, we want to make the commercial vehicle industry in the country to a winner of the digital Transformation.“

“With the commissioning of the extended development and testing center more than 100 attractive jobs to be anchored in Wörth in addition. Most of the Vacancies are occupied in Wörth, is also new. They thus offer attractive employment opportunities, because we get highly modern and future-oriented technologies to our location,“ says Thomas Zwick. “From other points of view, the new jobs are highly interesting: the design of the new premises takes into account the various activities of colleagues and the derived needs of the people in the center. So the aspect of ‘ergonomics at workplace’ has been taken into account consistently.”

The EVZ has numerous rough roads, and various road profiles, which represent the streets of this world. In this way, can be made for test vehicles to the same terms and conditions as are, for example, in South America, South Korea, Africa and, of course, in Europe. Furthermore, the test track is one of the EVZ, with an inclination of up to 49 percent brackets for function testing. In addition, office, workshop and service areas, which are also test rigs for, e. g., Truck components, test house are located in the ECC.

Of the road on the wheels: Sustainable and state-of-the-art implementation of test sizes in the case of Mercedes-Benz Trucks

Prof. Dr. Uwe Baake, presented in addition to the opening ceremony one of the most modern Truck chassis dynos in Europe, With the investment Mercedes-Benz has been testing Recently, Truck comprehensively, sustainably and in real time. In the 24/7-can be drives operating drivelines, ranging from the classic diesel over gas engines, hybrid drives and battery-electric and fuel cells under realistic driving conditions on the test bench, simulated and developed for mass production.

Instead of on public streets now, trips in the test hall through a driving simulation, as measured by the test or the statutory test, automated cycles, and very precise to drive. The Truck is connected via a control line with the test bench computer, and from there to all the necessary functions to be controlled. So many time-consuming fuel consumption measurements, which were previously carried out exclusively on the road are, under comparable conditions, and with even greater repeatability on the test bench possible. Mercedes-Benz Trucks thus makes a significant contribution to sustainable Transport.

The test bench has a large wind fan with an air flow of about 800,000 m3/hour, which corresponds to a maximum flow velocity of 90 km/h. The entire test section can be adjusted in the temperature range from -7°C to +50°C to the representation of extreme edge conditions can be set.

On the new test bench different vehicle can be driven combinations with up to four driven axles. The tractor is in the test hall on four drums with a diameter of three meters. In each role, a large, water-cooled electric motor with a power of 600 kW.

These electric machines allow the Simulation of all driving resistances, which act in a real driving operation on the vehicle. This extreme Slope of driving under full load with maximum load, or the braking operation departure during a mountain for example. On the test vehicle speeds cover all, in Europe, the permitted maximum speeds on motorways.

About the Mercedes-Benz plant in Wörth

The largest Truck Assembly plant of Mercedes-Benz Trucks in Wörth on the river Rhine, was founded in 1963 and produces Mercedes-Benz Trucks Arocs, Atego, and for more than 20 years, the world’s most successful Heavy-duty Truck Actros. The Mercedes-Benz Special Trucks Econic, Unimog and Zetros are built here. Up to 470 according to customer’s request-made Trucks leave Wörth per day.

Customers in over 150 countries to estimate the “Quality made in Wörth”. The location on the Rhine, the centre of competence for Mercedes-Benz Trucks in the global production network is. In addition, the Mercedes-Benz plant in Wörth over 50 years of experience in CKD production (Completely Knocked Down), and supplies the vehicle-kits in numerous overseas markets for final Assembly on site – to date, more than 750,000 Kits. With roughly 10,300 employees, the Mercedes-Benz plant in Wörth is the second largest employer in Rhineland-Palatinate. 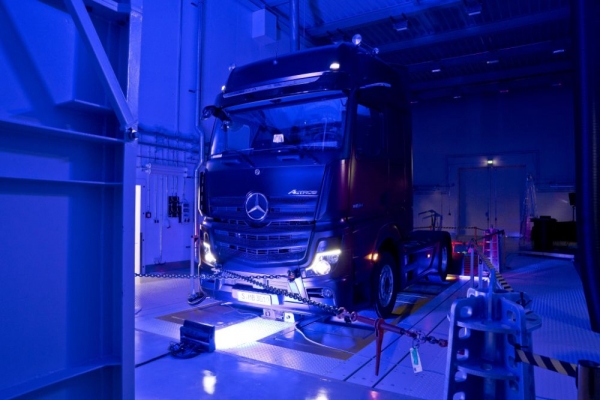 Solemn opening of the most modern Truck chassis dynos in Europe: With the system in the Mercedes-Benz plant in Wörth tests Mercedes-Benz Recently Truck comprehensively, sustainably and in real time. In the 24/7-can be drives operating drivelines, ranging from the classic diesel over gas engines, hybrid drives and battery-electric and fuel cells under realistic driving conditions on the test bench, simulated and developed for mass production.