5.4.2019 Cologne. The Toyota Motor Corporation produced from now on hydrogen from renewable energies: in the factory In Motomachi, Aichi Prefecture, the Japanese car manufacturer has installed a new system called SimpleFuel™, the hydrogen generates, stores, and fuel cell vehicles.

The Station uses the power from the solar modules on the roof of the production facility.

The power of The Sun provides the energy for the plant, the water by electrolysis into water and oxygen. Daily so produces about 8.8 kilograms of hydrogen, compressed and put under pressure. With this amount of seven to eight of the fuel cell forklift refueling, which are in use in the plant. Particularly practical: Due to the compact size SimpleFuel™ takes up very little space and can be strategically placed.

In order to minimize the CO2-emissions in the production, replaced Toyota’s conventionally powered forklifts successively through the fuel cell counterparts. Like classic fuel-cell vehicles like the Toyota Mirai (fuel consumption of hydrogen combined: 0.76 kg/100 km; combined electric power consumption: 0 kWh/100 km) and emit neither CO2 nor other pollutants – in the case of unrestricted suitability for everyday use and short refuelling times.

22 hydrogen-powered forklift trucks are already in the works, as part of an Initiative by the Japanese Ministry of the environment will be added this year, an estimated 50 additional vehicles. So, the introduction of SimpleFuel™ is part of this program. Since March 2018 Toyota operates a hydrogen station in the factory in Motomachi, with the additional investment, the company is responding to the growing forklift number.

In the Wake of the Toyota Environmental Challenge in 2050, which was presented in 2015, the company intends to reduce the CO2 emissions of its plants. To achieve this goal, Toyota’s various initiatives, including the promotion of the introduction and use of SimpleFuel™. In the framework of the Aichi Low-Carbon Hydrogen Supply Chain Promotion Association Toyota makes in addition, together with Aichi Prefecture, authorities and other companies for a CO2-poor hydrogen supply chain as a Whole is strong and relies on renewable resources.

In addition to a more environmentally-friendly production, the sustainability targets vehicles program on a reduction of the CO2 emissions of Toyota. The company wants to reduce the average CO2 fleet emissions of new cars worldwide by 2050 to 90 percent compared to 2010. The steadily decreasing share of hybrid vehicles, but by 2030, following a purely battery-electric models are designed to support this project. 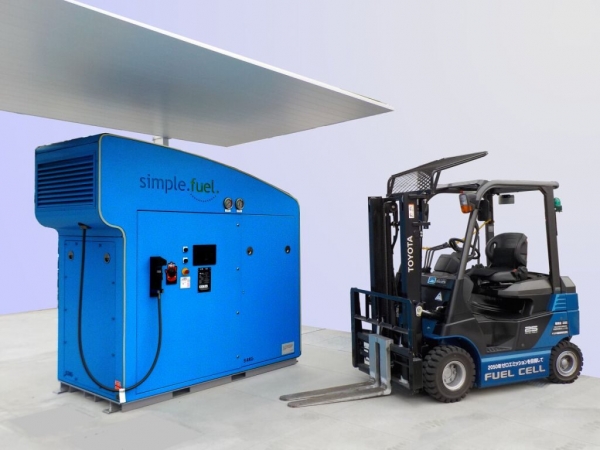