15.5.2019 Munich. At full throttle, according to the Most: The ADAC TCR Germany is this weekend from 17. to 19. May on the racetrack in the Czech Republic in their second round.

Three weeks after the exciting season opener in Oschersleben, the Fans are allowed on the racetrack close to the German border back to hot motorsports with 350 HP strong touring cars from Audi, Cupra, Honda, Hyundai, Opel, and VW offers – in addition, SPORT1 broadcasts the races of the ADAC TCR Germany in the TV. Online the runs in the Livestream on sport1.de and adac.de/motorsport as well as on the Facebook channel of the ADAC TCR Germany and youtube.com/adac .

As a table leader after the first two of a total of 14 races this season, Mike Halder (23, Meßkirch, Profi-Car Team Honda ADAC Sachsen) travels to Most. The ADAC Stiftung Sport funding pilot had retracted in Oschersleben, the places one and two, and wants to put his high-altitude flight, of course, so in the Czech Republic. “I am looking forward to the race and the challenge Must,” says the 23-Year-old, who is in the Honda Civic TCR on-the-go. Last year, Halder had demonstrated with a second place already, that the track in Most.

Even better memories of the course near the border to Germany has, however, Mike Halders sister Michelle (19, Meßkirch, Profi-Car Team Halder): – in the second race in 2018, second behind the points correct guest starter Petr Fulin (42, Czech Republic), and the full number of points won. “It was a great experience and will stay with me forever,” says Michelle Halder, who switched this year from the Cupra TCR to Honda and to Oschersleben, a positive interim conclusion. “But my dream is definitely to travel more often on the Podium,” she says. So why not Cider? “Of course that would be a good thing!” And a “real win” is missing the 19-Year-old still in your collection.

For the Opel Astra TCR-driver Steve Kirsch (39, Chemnitz, IMC Motorsport) and the brothers Dominik Fugel (22, Chemnitz, Profi-Car Team Honda ADAC Sachsen) and Marcel Fugel (18, Chemnitz, Profi-Car Team Halder) are the races in Most, almost a home game – after all, the three of us come from the only just 90 kilometers away in Chemnitz. “I hope I can enter this weekend with good results, especially for my Team who always works extremely hard,” says Dominik Fugel. His younger brother, Marcel, is this weekend as a guest starter, the 18-Year-old has already collected in the past season, their first experience in the ADAC TCR in Germany and is now looking forward to his Comeback.

At the wheel of the Hyundai Team Engstler used the VIP cars will sit in Most Jessica Bäckman (21, Sweden). The young Swede continues normally for Target Competition in the TCR-Europe, and is eagerly awaiting her appearance in the Hyundai i30 N TCR in the ADAC TCR Germany. “I am very happy about this Chance, because I wouldn’t have expected,” says Bäckman: “I was surprised when I got the offer. I don’t know the track in Most. But my goal is to ride forward.“

For the participants of the Honda Junior Challenge at the weekend in the next round. In the standings of the juniors, the winners of which will receive at the end of the season, a new Honda Civic, currently leads Bradley Burns (17, United Kingdom, Team Pyro Motorsport). The young Briton, a good friend of two-time Champions Josh Files, had made in Oschersleben with two Wins in the Honda Junior Challenge, with the emphasis on attention. 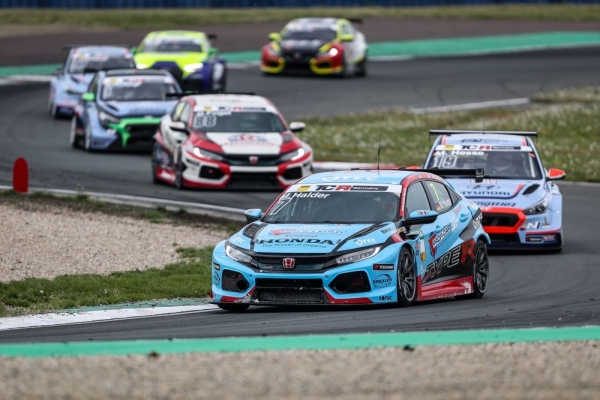